Assault at Casey's Leads to Arrests 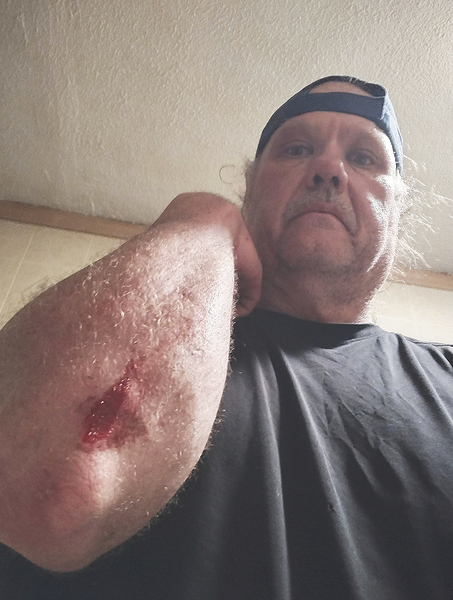 Mackinaw resident Danny Hill displays the injuries he suffered after his altercation with multiple teenagers in the parking lot of the Casey’s General Store.

A large altercation involving multiple teenagers occurred at Casey’s gas station, in Mackinaw on Wednesday, that lead to the arrests of 4 teenagers by the Mackinaw Police Department. Some time that evening, the teens exited the gas station and created a disturbance in the parking lot, at one point surrounding the vehicle of a 31 year old mother who had chided the teens for their misbehavior, witnesses say. At one point, the teens indicated that they were willing to resort to violence, however, local resident Danny Hale stepped in.

Witnesses tell The Mail that the next few moments happened fast: a fight started between Hale and at least 4 teens. While Hale was defending himself, the young mother who he stepped in to defend was given time to leave the parking lot in her vehicle. At one point, Hale produced a taser and defensively used it on at least one of his assailants. As quickly as it started, the teens fled to their vehicle and beat a hasty retreat.

“I’d had enough of it” Hale tells me, referring to the harassment aimed at the young mother. “So I went over to tell them to leave, and here they all came, I think, 5 of them. They started hitting me so I dropped my drink and threw a few back at them. I got knocked down a couple of times,” Hale acknowledges, “but I kept getting back up.” Hale tells me his injuries were minor, consisting of a scraped elbow and swelling near his eye.

The four males arrested after the incident were:

Under Illinois law, Aggravated Battery is a Class x felony which is punishable by 6 to 30 years in prison and a fine up to $25,000. The Mail will continue to report on this story as details develop.