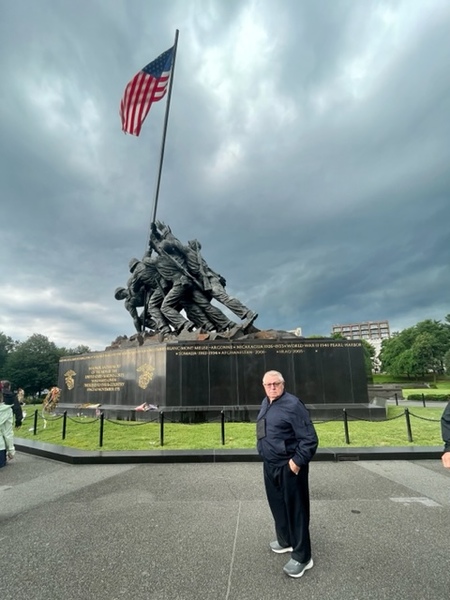 Waynesville native Al Furman was recently recognized for his service to the country by a group known as the Honor Flight Network. The national group selects men and women who have served in the U.S. military, and flies them to Washington D.C. for an exciting day seeing the nation’s memorials and experiencing the gratitude and appreciation of a thankful country. “I’d been asked to go in the past”, Al tells The Mail, “but I’d always thought it was more appropriate to let the ‘older guys’ go ahead of me. But, I’m 81 now. So I guess it was just my turn.”

Al enlisted in the U.S. Army in 1961, became a nuclear missile panel operator, and was attached to the Strategic Air Command (SAC) - which controlled land based strategic bomber aircraft as well as intercontinental ballistic missiles (ICBMs) during the Cold War. When he talks about his time in the military, Al is careful to make an important distinction: “I am a ‘Vietnam era veteran’, not a ‘Vietnam veteran’”, he says. “I never put my boots down in Vietnam unlike some of the poor boys that would enlist in the years to come.” Even so, Al’s term of service saw momentous world events where the fate of millions hung in the balance. During the Cuban Missile Crisis, Al was whisked away to his duty station where he remained for the duration of the crisis. “Honestly, sitting in an underground bunker meant I was in one of the safest spots in the world during that time.”

Asked about his Honor Flight and the day he spent in D.C. Al told The Mail, “It was a busy day! I think I was up at 4:30 A.M. and put on a plane for a flight that was about 2 hours long.” After landing, Al and the group he was with were taken to Arlington Cemetery, where they saw the “Changing of the Guard”, then on to see the World War Two memorial. The group had lunch at the FDR memorial and then spent the rest of the day seeing the rest of the veteran memorials: Korea, Vietnam, Navy, Iwo Jima, and more.

“We only had one SNAFU” Al says, using an old informal military acronym that is, well, best looked up. “We were at the Vietnam memorial when it started sprinkling, which then turned into a pretty good rain, so we got a little wet.” Moisture and memorials aside, Al saw something a bit more important on his trip. “Here we were, a group of older guys with bad knees, walking with canes, or even sitting in wheelchairs. However, when we got together that day, it was like all that disappeared. We were in our early 20’s again. It’s like we were back discussing our mustangs and girlfriends, without much worry about the world events going on around us.”

Eventually, the day came to an end and it was time to bring the veterans home. Al got to the Peoria Airport pretty late. “I was still on the plane at about midnight and I had trouble believing that anyone would still be there waiting on us” Al says, referring to the groups of civilians that cheer for the Honor Flight recipients as they walk through the terminal. “I was sure they would have gone home for the night, but there they were cheering for us.” Al points out that, due to the political landscape of the 1960’s and 1970’s, a lot of veterans did not get the typical “Coming Home Parade”. “Getting out of the Army in 1963, we were told that it would probably be better if we put on our civilian clothes before leaving the base. We just didn’t get that type of recognition. However, the Honor Flight and the reception I received upon my return helped make up for that. I think that is their mission. It was a wonderful day and I’d like to thank everyone that had a hand in putting it together for us.”